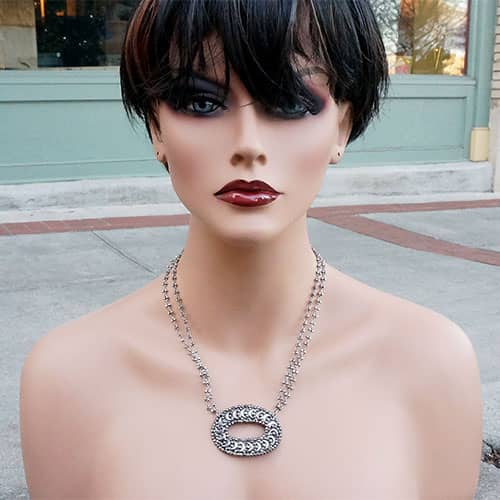 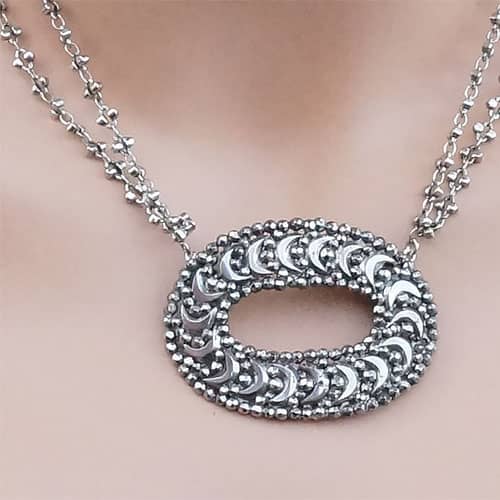 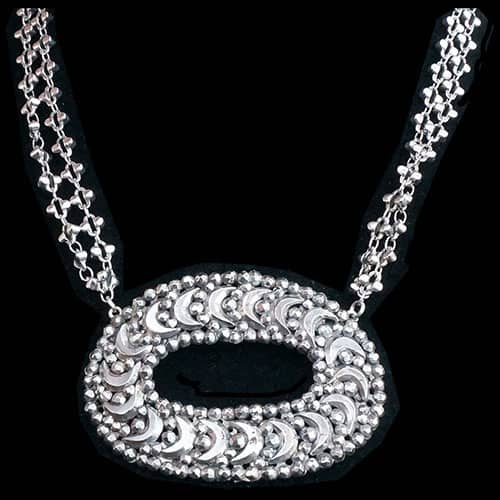 Before starting My Mothers Buttons, Linda Wright worked her way through the ranks at Nordstrom. She started out sorting hangers in the basement, rising to become the accessories buyer for twelve stores. She then went on to work in product development where she worked with designers in Germany, Paris, and Italy. A particular highlight, she noted, was working with Paloma Picasso in Italy on a line of leather goods. Each piece of jewelry is hand crafted by Linda and her daughter in her studio in Edmonds, Washington where she has resided since her childhood.

French Steel Cut
Definition: Jewelry made of cast-steel studs and beads that are pierced or faceted, then arranged in patterns and packed closely together (intensifying their sparkle), and finally screwed or, in later pieces riveted, onto a metal back (originally steel, later copper). Also, links made of cut steel pieces. Developed in England in the early 1600s, originally for buckles and buttons, cut steel began assuming other forms by the 1760s, including rings, brooches, bracelets and frames for Wedgwood medallions and cameos.

By the 1880s, the French assumed the lead in cut steel jewelry manufacture, turning out pavé-set, intricate pieces. The French shoe buckle, originally made in England, became a popular fashion in France during the revolution as a replacement for the fine jewelry the monarchy seized to pay for the 7-year war. Each buckle is comprised of several hundred individual rivets.

This collection was discovered from Paris in old store stock that sat in boxes for over 100 years, leaving them absolutely pristine and in museum quality.


French Cut Necklace is presented on pure brass chains that have been antiqued, then clear coated. The chains contain no nickel and will not tarnish. 17" long with additional 1.5" providedf by extension. Pendant is 2.25" wide and 1.75" long.

Ships for $5. We ship with a tracking number so you know it's coming and we know it got there. In the event you purchase more than one item during your visit, we will credit your card with the difference between what our cart automatically charges per item  and the actual combined shipping. Credit applied after checkout. Ships to Canada for $11.50. Difference charged after checkout when package ships.

$249.00
Note: Dropship items require time to manufacture, so deliveries can be delayed three weeks or more.